June 24, 2021 (Investorideas.com Newswire) McAlinden Research Partners contends that efficient vertical farming is poised to surge as an increasingly popular investment as a result of the mounting pressures on traditional agriculture.

While there seems to be no short-term answer for skyrocketing agricultural commodity futures, higher crop prices have foisted agtech ventures into the spotlight. Efficient vertical farming is becoming an increasingly popular investment as a result of the headwinds facing traditional farming.

As it stands, the volatile nature of climate change and population growth are creating a double whammy for the global crop supply. New data shows that vertical farming can increase crop yield by up to 700% while cutting water usage significantly. Vertical farming could one day prove to be a mainstream agricultural industry as its scalability comes closer to realization.

Vertical farming, a type of indoor, controlled farming where crops are grown in several stacked layers (similar to a multi-story building), has been a relatively niche marketaEUR”until recently.

As MRP has recently highlighted, water has become an increasingly scarce resource and years of drought may continue to become more common. Per Oregon Public Broadcasting, the past year has been the driest or second driest in most Southwestern states since record keeping began in 1895. Higher average temperatures, as we’ve seen over the last two decades, increase the loss of water to the atmosphere, likely playing a significant role in increasing the frequency and severity of droughts. Studies show that, since 2000, about half the reduction in the Colorado River’s flow has been due to warmer temperatures. For every degree Celsius of warming, the river’s flow is expected to shrink by 9%.

According to the US drought monitor, most of California is currently experiencing drought level D3 (Extreme Drought) or worse. Reuters writes that Lake Mead, the reservoir created by Nevada’s Hoover Dam, has sunk to its lowest level ever. Mead is the largest reservoir in the United States and crucial to the water supply of 25 million people including residents of the cities of Los Angeles, San Diego, Phoenix, Tucson and Las Vegas.

South America’s crop king, Brazil, is also facing a drought that marks its worst dry spell in 91 years. Drier-than-normal weather has slammed production of sugar and coffee in Brazil, the world’s largest supplier of those products. Last week, coffee futures touched their highest price since 2016.

Axios writes that if the global population continues its upward trend we will need 50-70% more food over the next 30 years, according to UN data. Fortunately, crop yields could rise by roughly 700% per year with vertical farming technology, as indoor systems can operate 365 days year without worrying about weather patterns.

In addition, the amount of land used to grow crops is significantly diminished when farms switch to an indoor vertical approach. Per Free Think, roughly 700 acres of farmland can be condensed into a vertical farming structure the size of a big box store.

Further, these farms can be constructed in urban areas due to their limited footprint, which in turn can reduce the time necessary for produce to make its way into cities. Eden Green Technology writes that most crops would be able to move from indoor farms to retail shelves in less than 48 hours, minimizing the loss of freshness and fuel waste in the agriculture transportation process.

The rapid rise of crop prices and resulting food inflation, now at its highest level in a decade, has made the need for innovation in agricultural technologies even more of a necessity.

According to a report from Fortune Business Insights, the global vertical farming market is projected to reach $17.59 billion by 2028. Today, the global market stands at $3.04 billion, which would set the industry’s compounded annual growth rate (CAGR) at a strong 25.4%.

The report emphasized that a pandemic-era boost in organic, locally grown food products caused the market to grow 19.1% in 2020. Per Axios, venture capital funding for vertical farming companies reached $1.9 billion globally in 2020, almost tripling the level of investment from the year prior.

Recently, TechCrunch reported that indoor farming startup Bowery Farming, based out of New York City, raised $300 million in a new funding round. The announcement brought total funding for the company above $472 million, which values the company at roughly $2.3 billion.

Aerofarms, another vertical farming company, recently announced a 136,000-square foot indoor farm in Virginia, which would be the world’s largest indoor vertical farm, slated to begin production in mid-2022. The company is rapidly expanding its distribution operations in the Northeast, collaborating with Whole Foods, Amazon Fresh and FreshDirect , according to Supermarket News.

Aerofarms says its indoor model yields annual productivity up to 390 times greater than traditional farming. Headquartered in Newark, NJ, the company is focused on bringing fresher produce to cities at a faster rate than conventional agriculture can provide.

As much as vertical farming technology is advancing, the industry still faces many challenges before it can become a mainstream way to grow and deliver produce.

Currently, there are more than 2,000 vertical farms in the US. That figure is well above Japan, which currently has the second most vertical farms in use at roughly 200. More vertical farms are rolling out across the Asian continent, in nations like China and Taiwan, the latter of which has been battling a historic drought.

However, in the US the vertical farming market is still relatively niche compared to the traditional farming industry. The output of US farms alone was worth $136 billion in 2019.

Further, the high fixed costs of implementing indoor farms still limit the industry’s development in the short term. According to Free Think, these farms can cost upwards of a hundred million dollars to construct individually. Meanwhile, the cost of production while selling produce at market prices has hindered the ability of vertical farming companies to turn a profit in the past.

It will likely be several years before vertical farming technologies begin tapping their true potential, but a scaling of the industry is becoming increasingly likely as a counter to climate change and diminishing water availability. Investors can gain exposure to this burgeoning industry via CubicFarm Systems (CUBXF) and AppHarvest (APPH).

Aerofarms (AFRM) is slated to go public soon, via a SPAC merger.

For now, though, traditional farming techniques continue to struggle with climate-related headwinds, which are forecast to worsen. In light of this, our LONG Agricultural Commodities theme remains highly relevant.

You can read MRP’s most recent reports on rising crop and livestock prices here:

Water May be a Hot Commodity as Drought Brings Heightened Crop and Wildfire Risks to the US West (April 29, 2021)

MRP added LONG Agricultural Commodities as a theme on April 7, 2021. Since then, the Invesco DB Agriculture Fund (DBA) has returned 11%, outperforming an S&P 500 gain of 4% over that same period. 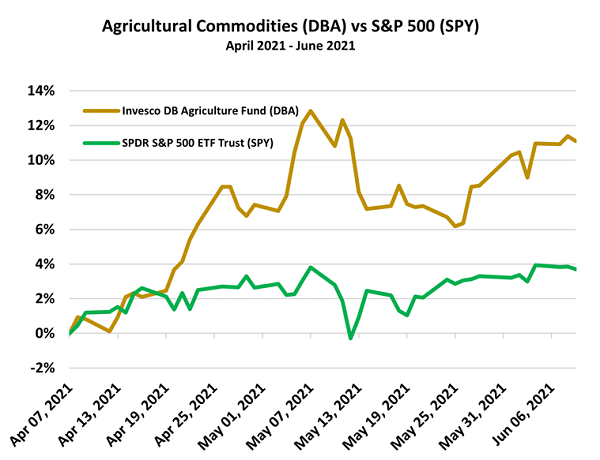 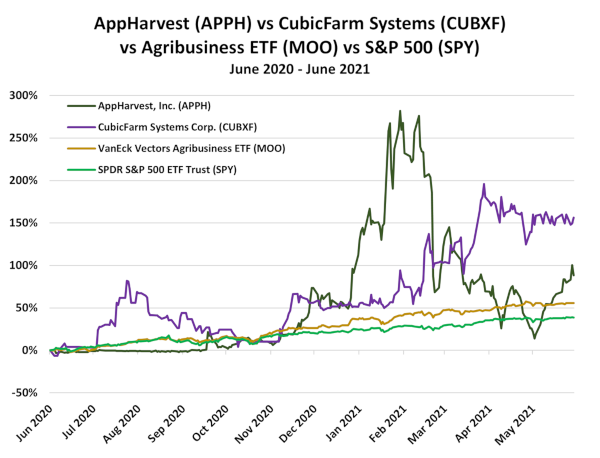 McAlinden Research Partners (MRP) provides independent investment strategy research to investors worldwide. The firm’s mission is to identify alpha-generating investment themes early in their unfolding and bring them to its clients’ attention. MRP’s research process reflects founder Joe McAlinden’s 50 years of experience on Wall Street. The methodologies he developed as chief investment officer of Morgan Stanley Investment Management, where he oversaw more than $400 billion in assets, provide the foundation for the strategy research MRP now brings to hedge funds, pension funds, sovereign wealth funds and other asset managers around the globe.

October 22, 2021 (Investorideas.com Newswire) Pandemic will cease to be a problem at some point. ...
By
2 days ago